The Storm, in their fifth Richard Bell cup final appearance on the trot, retained the trophy after an emphatic victory at Aldershot Garrison on Sunday. The Storm’s third win in the competition came after they beat Aldworth Arrows 65-37. 65 is the biggest total since Chiltern scored 67 in 2015, and the winning margin of 28 points was the biggest since the Storm won by 29 against Camberley in 2016.

Aldworth took the lead at 2-0, but baskets from Becky Wellington and Jen Dorney-Savage gave the Storm a lead they were never to relinquish. The Arrows were hampered when Hall of Famer Caroline Turner was forced off with a nasty hand injury picked up when trying to steal the ball off Becky Wellington, but by that stage the Storm had already secured an 8-point lead, and the Aztecs won each period (19-11; 14-8; 21-11; 11-7) to record a fine victory. Becky Wellington led all scorers with 22 including a three-pointer and 5 of 6 from the foul line. All eight Storm players scored, and only one, Becky Wellington, fouled out. 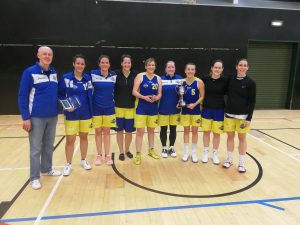