Auriol came off the bench and scored 13 points including a 3-pointer in each period and the final score of the game from the foul line to finish the game at 65-37. Auriol played solid defence without giving up a single foul, and her shooting gave the Storm an important boost in the first session taking them from a 11-6 lead to 14-6, and then 17-6 when Nicky Harris made in back-to-back bombs by the Aztecs ladies. 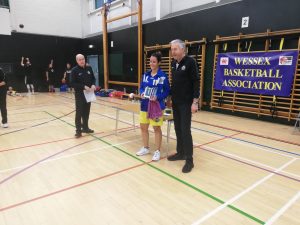