The Aztecs teams have had great success in the opening weeks of the new season, with the Storm taking pride of place with an unbeaten start.

The Storm have opened their league campaign with a 64-32 win over Woking Blackhawk Ladies, and a win in the first round of the Richard Bell Cup over the Aztecs Suns 62-20. The Storm sit proudly at the top of Ladies Div 1.

Apart from that defeat to the ladies first team the Suns have an unbeaten record in Ladies Div 2 with wins over Woodley Wildcats 47-37 and Aldworth Arrows Academy 49-27. They are third in Ladies Div 2 but only because the teams above them have played more games.

The Jags are second in Mens Div 2 after wins over Kennet Kingfishers 66-39 and Yateley Silverbacks 2 58-35. They lost to league leaders Slough Scorpions 43-52 but gained revenge in the Karl Taylor Shield beating Slough 74-51.

In Div 3 the Lions lost at Basingstoke by just 2, 53-55, before recording a win in overtime against Chiltern Fastbreak. Another loss followed at Windsor Warriors 54-69 after a slow opening period. Gerry Hill (featured in accompanying photo) was the MVP for the second game running. The Lions are currently 4th in Div 3.

The Falcons have recorded two good wins in the Div 4 beating Woodley Wasps 67-43 and Bracknell Cobras Venom 73-27. Their only defeat was to Div 1 outfit Yateley Silverbacks 1 in the Karl Taylor Shield 36-93. They are fourth in the league, one of only two teams with 100% playing records.

Lions make in 3 in a row 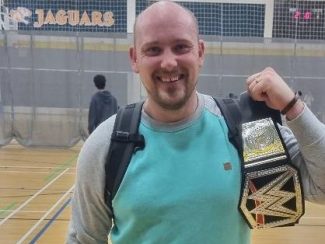 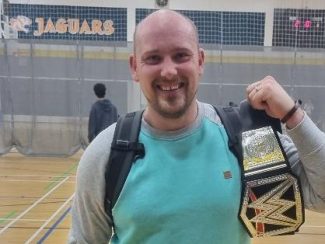