The Aztecs club were delighted to welcome the Head Coach of BBL side Surrey Scorchers to Wellington College on Thursday (29th August).

Coach Creon Raftopoulos, ably assisted by his son Caylin, himself an experienced play-caller (he is the Head Coach at the Surrey Scorchers Basketball Academy), took a two hour session which included some very useful drills, offensive plays and some thoughts on how to keep the game simple.

A player is only as good as his team-mates let him be. To be the best you need to be a good team-mate and focus on what you do well; bring those skills to each and every game.

Coach Creon emphasised the key elements all players should embrace when they play.

Play honest, play hard, play well and ask for a break if you tire. Everyone should play hard defence, box out effectively and rebound everything.

The session started with a series of shooting drills which emphasised good basic footwork, key to success in this vital skill.

Passing was the next focus, with Coach Creon reminding players:

The drills focussed on spacing, something that the Aztecs did not do well at the Scorchers Invitational Tournament held at the Surrey Sports Park recently.

Finally the players were introduced to an excellent foul-shot drill, something they may see more of at training as the season progresses!

In conclusion Coach Creon urged the players to work on their mid-range shooting, a key to success in the game.

To win, teams need to be successful with at least 50% of the shots they take from all areas on the floor; any less and victories are hard to come by.

The players were delighted by the session, and the Aztecs coaching staff will be working hard to implement much of what he covered in the coming months.

Details of the Surrey Scorchers can be found at: https://www.surreyscorchers.co.uk

The new Scorchers line-up for the 2019-2020 season is shaping up with the latest signing, James Hawthorne, having only been announced earlier today. The Aztecs have an affiliation with the Scorchers and details of reduced price entry will be announced soon.

Our thanks to Coaches Creon and Caylin for their time. On Thursday 12th September the Aztecs will have another guest session featuring players from the Surrey Scorchers – 7.30 to 10pm at the Wellington College Sports Club. 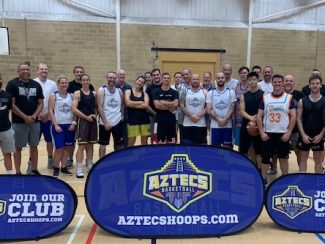