The Falcons put up a tremendous performance against the Royals before going down by just 9 points – the same margin as there was when the Aztecs Jags beat the Royals in the cup a few weeks earlier. A strong second session saw the Falcons recover from a 15-point deficit to trail by just 6 at the turn. Unfortunately the Falcons stuttered at the start of the second half as Maidenhead once again established a dominant position to lead by 19, but following a time-out (taken a couple of minutes too late perhaps) the Falcons came back with a strong run of their own. The Falcons won the final period, but the game was most enjoyable and an indication of how well the Falcons can play. Consistency is the key as the Christmas period approaches.

The Falcons suffered from a sluggish start when they were down 8-22, and one six-minute lapse when they were out-scored 13-0 at the start of the third period, but other than that they were in this game and played some great basketball in attack and in defence. 24 of the Royals points came from eight long-range shots; the visitors outshone the Falcons from the foul line with 6 of 11 at 55% compared to 5 of 12 at 42%.

What an enjoyable game, and such a contrast to the disappointing defeat at the hands of the Wolfpack last week. Some great passing often resulted in good looks, and some of the finishing was terrific. Skipper Iain Rogers (pictured at warm-weather training camp last week) was again a rock in defence while Matt Blowfield added some penetration up front. Top scorer Dan Sinclair was back to lead with 13 points including a brace of 3’s, and nine of the team scored. Despite some determined defending very few fouls were committed, with only two players getting more than one foul called against them. 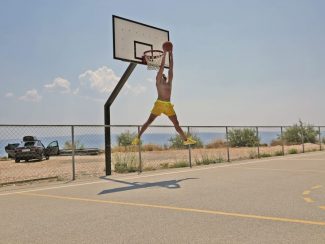