Aztecs Basketball Club celebrated its 47th year of competition at the annual End of Season Awards held at Cantley House Hotel, thanks to the usual efficiency, hard work and dedication of Laura Gier-Jones.

The Aztecs men picked up the Karl Taylor Shield in 1979 – the first of three consecutive victories for the team at that time, and now, 40 years later, the Storm have won two more trophies after they triumphed in the Ladies Div. 1 Play-Off final and the Richard Bell Cup final

The Falcons once again enjoyed their basketball and had an encouraging year finishing 10th of the 11 teams in Div. 3 with a 3 and 17 playing record. In the Karl Taylor Cup they lost to the very strong Craftsmen LT Utd in Round 1 and then to the equally formidable Yateley Silverbacks 2’s in the Plate competition.

The Lemmings had their moments in what was a turbulent year. In Div. 2 they finished 10th of 10 with a 1 and 17 record, and in the Karl Taylor Cup they lost their Round 1 tie to the Div. 3 champions Kennet Kingfishers, but then won their Plate game against Yateley by 62 points before succumbing to Woking Blackhawks in the Plate ¼ Final by just 3 points.

The Jags got much tighter as the season progressed, and after losing all 7 of their opening league games they won 3 of 4, ending up 7th of 9 in Div. 1 with a 4 and 12 record. In the Karl Taylor Cup they beat Basingstoke Blizzards in Round 1 before going out to the eventual Cup and League champions South Bucks Comets by just 11 points.

The Suns had another wonderful season, with the team functioning well in their own right without having to rely on much support from Storm players, something Coach Amanda Trinder was especially proud of. The Suns finished 2nd of 8 in Ladies Div. 2 with a record of 10 wins and four defeats, two of which were their last two league games of the season, home and away to the champions Swindon Shock. In the Play-Offs the Suns lost home and away to the Aldworth Darts, and in the Richard Bell Cup they lost in Round 1 to Winchester Angels before beating Yateley in the Plate and eventually going out to Camberley Goldhawks by just 5 at the semi-final stage.

Despite losing out on the Div. 1 title when they lost their last regular season game away to Southampton, the Storm had another fantastic winter, winning the Play-Offs for the second year running and the Richard Bell Cup for the second time in three years. The Storm have now won six of the nine titles available to the ladies in the last three years – a phenomenal achievement! In the Play-Off final the Storm beat Aldworth Arrows 71-47 with Jenny Dorney-Savage picking up the game’s MVP (squad featured in photo). In the Cup final they saw off the Arrows 45-37 with Nynke Upfold securing the MVP award. 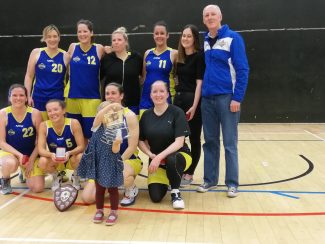