Coaching is almost impossible when you have to do the scorebook at the same time! This game was always going to be difficult, but the task was made even harder when, with no one around to do the table, Coach Walker realised he was the only one in the hall qualified to keep the score.

The game started slowly with defence at both ends dominating. After 5 minutes the Falcons trailed by just 2 at 4-6, with Woodley’s points coming from three foul shots and a 3-pointer. By the end of the quarter it was 8-16, and a similar margin of victory in the second session saw the visitors open up to 17-33. The Falcons were on fire at the start of the second half and out-scored their opponents 12-2 to reduce the deficit to just 6. At this stage having a coach actually coaching would have been really handy as the Greenflash pushed hard and scored 16 without reply in 5 minutes. The teams traded baskets for the rest of the game and the second half score showed how far the Falcons have come this year as they lost it by just 3 – 29-32. The Aztec players retired to the bar after their last league action of the season to reflect once again on what might have been.

Paul Howard once again led the Falcons scorers with his biggest haul of the campaign, and hit three 3-pointers and 3 out of 3 from the line. Matt Blowfield netted 7 to record points in his 18th consecutive game. Only five Falcons have managed points in every game they have played this season – the others are Jack Parker, Nikos Tsigaridis, Paul Howard and Ben Roberts, whose rehab from a serious finger injury was put on ice last week as his shoulder was also put on ice following a nasty fall in training! The Falcons scored 40 points once again and even set up a play at the death to try to make it a 50-point haul but that did not quite come off. The Falcons made 5 of 7 from the line at 71%.

This was possibly the least enjoyable game I have ever coached, and desperately frustrating after all the improvements the team has made over the past few weeks. Some of the attacking moves showed real promise, and the set pieces have improved no end and led to several open shots and even some baskets. The players are desperate for success and as a result their biggest failing is trying to force plays they know will be successful if they come off.

This season the team has been much more competitive and in the last few weeks individuals have make huge progress; the team is working much better together than at any time in the past two years.

Next season the aim should be to get results which better reflect the effort and commitment shown this past year. 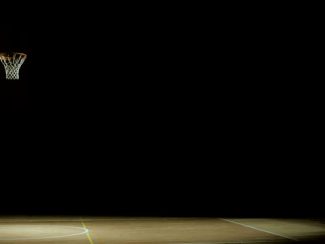